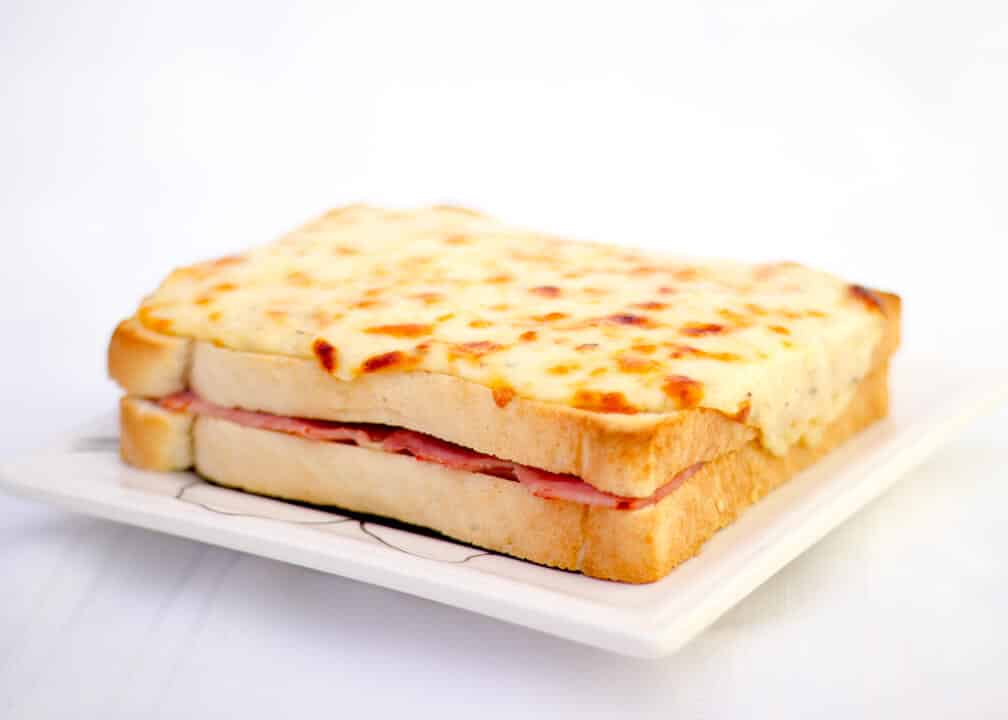 Most Sunday mornings, I make the Mr a bacon sarnie. Me? I quite often desire something a little more… ‘fancy.’ This week I had some spare ham and cheese so thought I would use the opportunity to make myself a Croque Monsieur. For those of you that haven’t heard of this french delight, it’s basically a glorified cheese & ham toastie. Though I can confirm – it’s WELL worth the extra effort!

Here is what you will need to make 1 Croque Monsieur.

Making for more? Simply multiply the ingredients by the amount of people you are feeding.

In a toaster or under the grill, lightly toast the bread until just golden on both sides.

To make the sauce, melt the butter in a saucepan over a low heat then throw in the flour.

Stir constantly over the low heat for 2 minutes. It should look a little something like this… 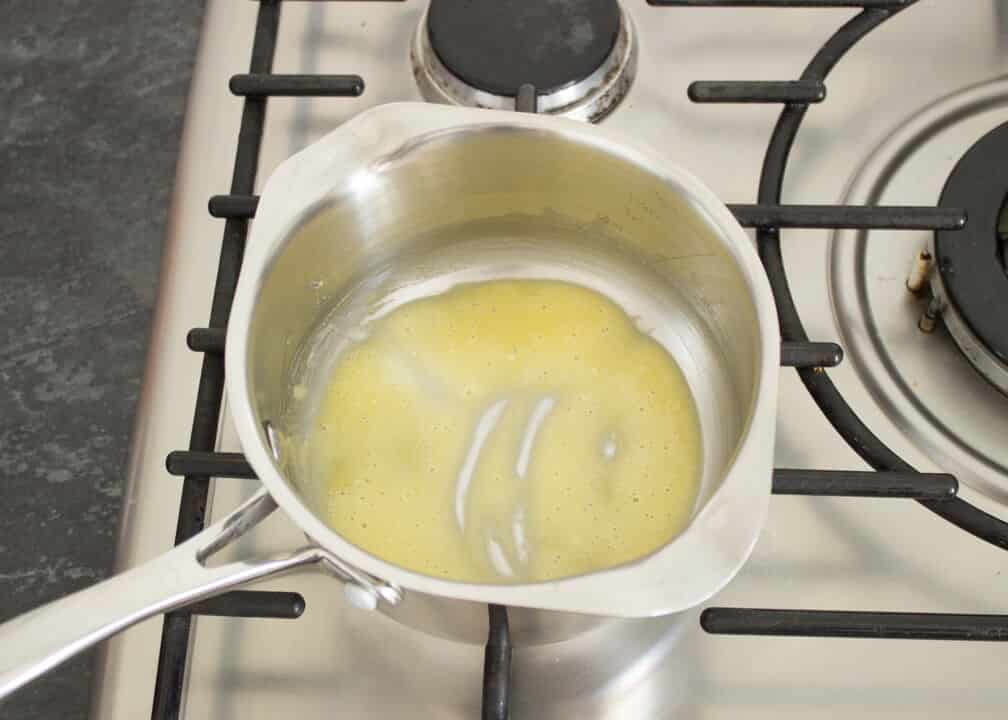 Gradually add in the milk bit by bit, stirring constantly and fairly vigorously to smooth out any lumps.

When the milk is all used up, you should end up with a slightly thick white sauce. 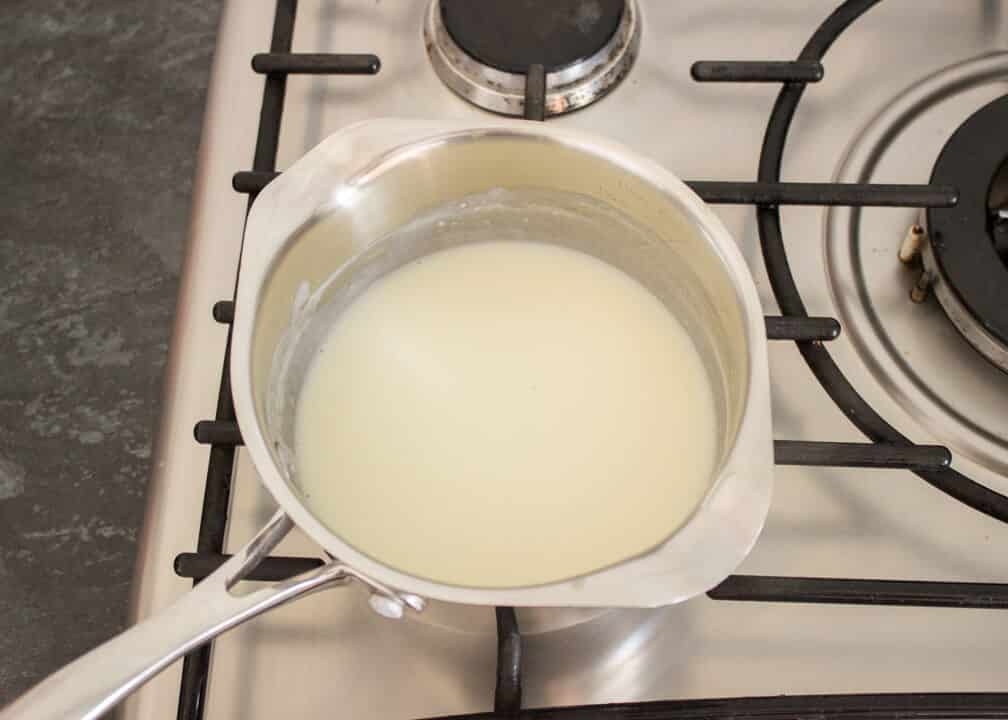 Add in a little nutmeg & season well with salt and pepper. Then stir through the parmesan cheese. If the sauce is still a little runny, turn the heat up to medium and cook, stirring constantly, until it thickens.

You want it thick enough to be able to spoon on the top of the sandwich without it running off the sides. 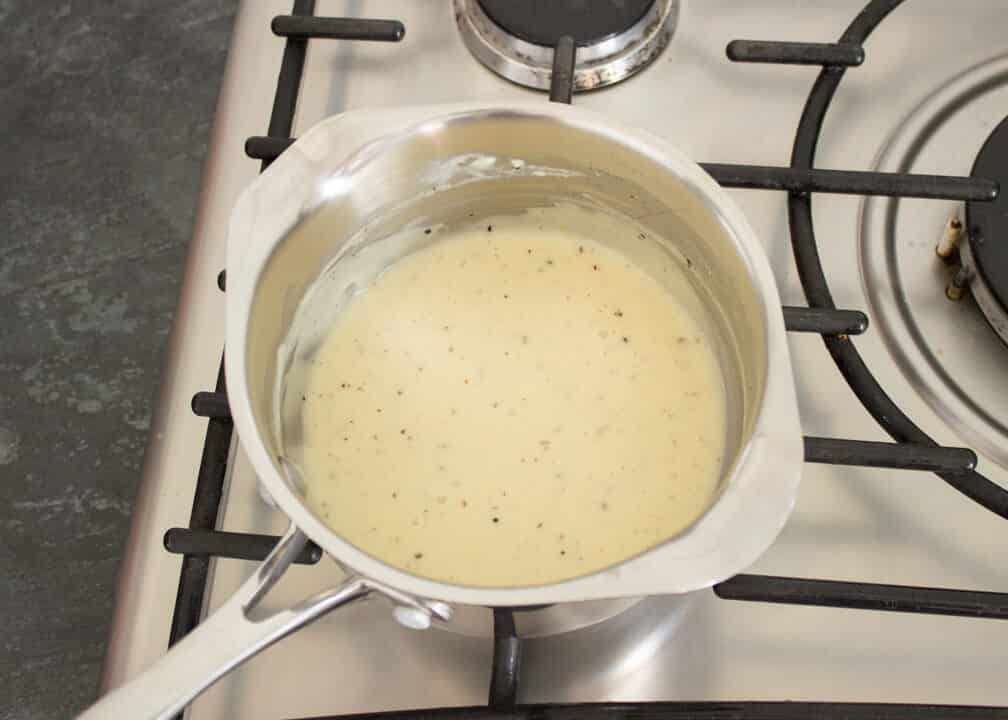 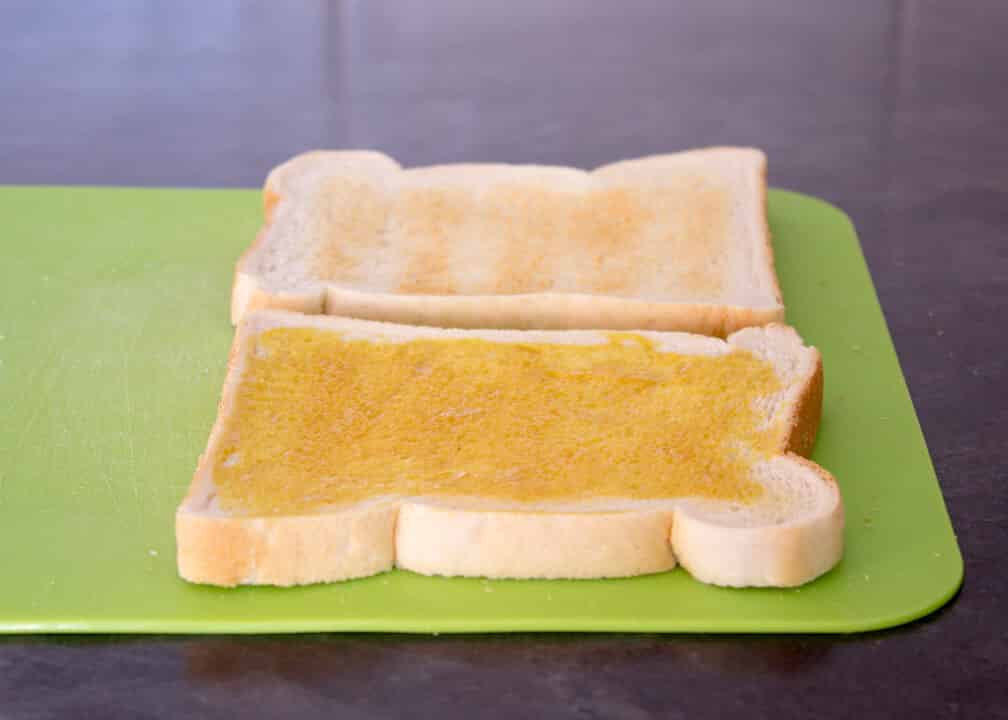 Now top both slices with grated cheddar cheese, reserving a little for the top. 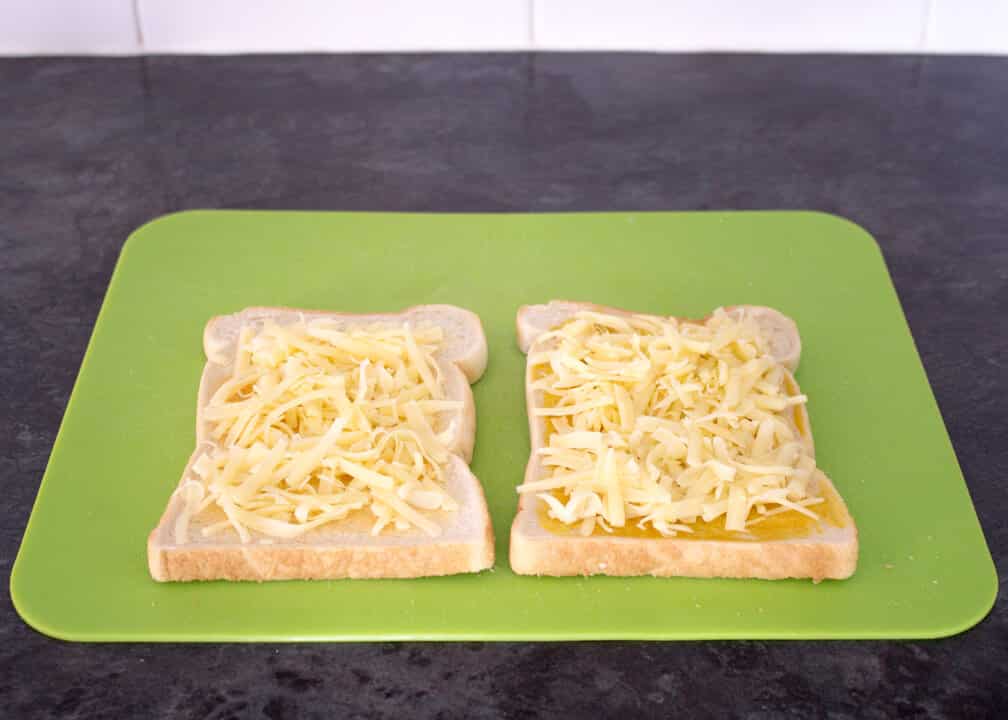 Next, place the bread with just cheddar cheese on top of the slice with ham on it.

Pour over the sauce and spread around evenly. Then top with the remaining cheddar cheese and place onto a baking tray. 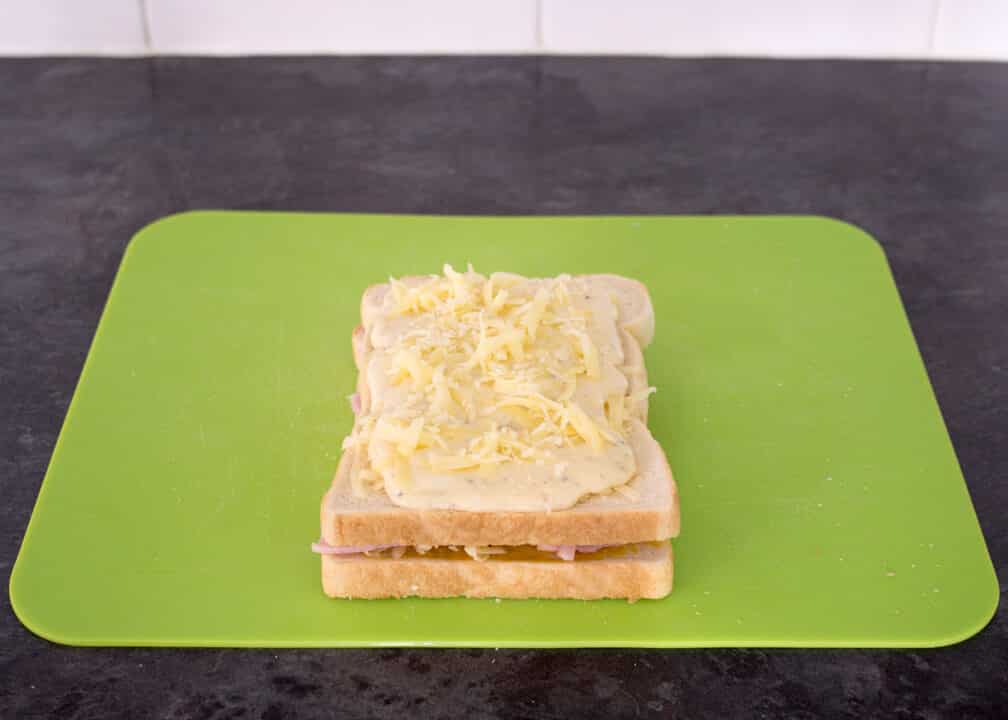 Bake in the oven for 5 minutes then turn on the grill.

Grill until the topping is all golden, bubbly and oh so sexy… 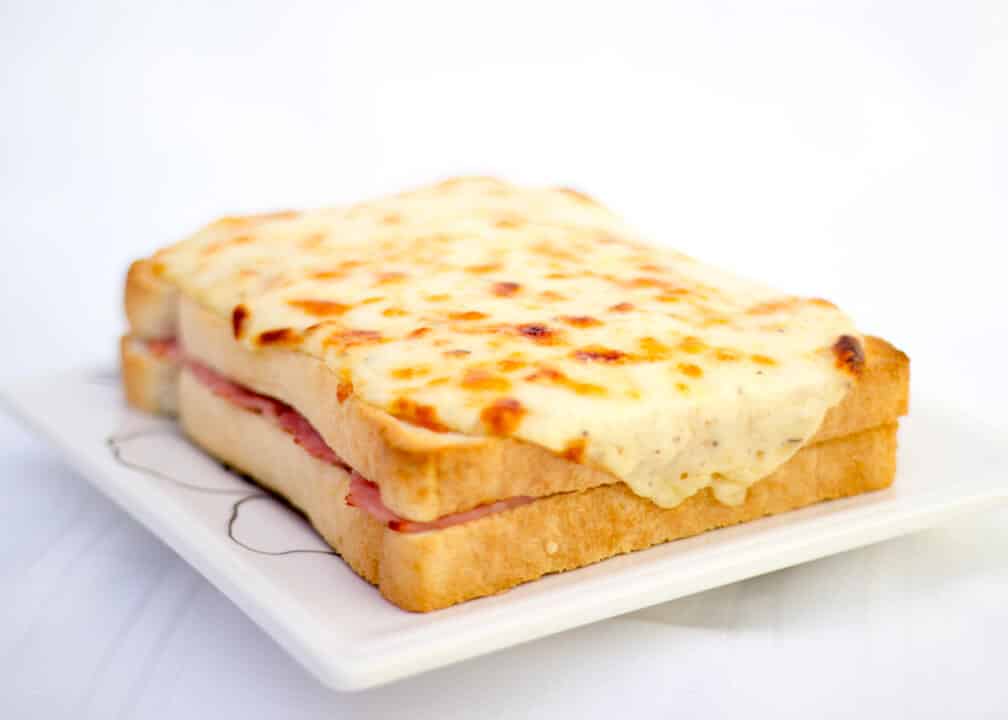 And that is what you need to do to create one of the most incredible breakfast/brunch dishes in the entire world. I told you the Croque Monsieur was better than a ham and cheese toastie!

Literally, as soon as you cast your eyes over that sultry, golden, bubbly topping – you won’t be able to resist it’s charm. I implore you not to skip on the honey mustard & nutmeg either. I swear to the gods – they make this sing like a celestial being sent from heaven to implement world peace! Genuinely… absolutely… divine. You NEED to make this!

The Mr was a little jealous when I sat down next to him with this vs. his humble bacon sarnie. I think I might be making two next time…

And on that note, I hope you enjoyed the post my lovelies!

You have changed my life!!! I probably make this twice a week! Your's is the only recipe where my bechamel doesn't break. Thank you!!!

Hi Angel. Aww brilliant! I'm so happy you love my recipe and it works so well for you :) Thank you for taking the time to share this with me! Emma x

also, my last name is Mason, are you a Mason too?

mmm, that looks so good! Sometimes I wish I wasn't a vegetarian...

Awwww, maybe it would be just as good with avacado in the middle and a fried egg popped on top? Egg and avacado are a fab combo!

A million times better than your average grilled cheese! I just wanted to let you know that I have a website (Simply Creative Recipes) where I showcase recipes that I find and I am linking to this post if you don't mind. You are welcome to submit your recipes to my site if you'd like!

Thanks for your comment Alyssa, that's very sweet of you! And of course I don't mind that you link to my post x

I create quick and easy recipes with everyday ingredients to make your life that little bit easier!