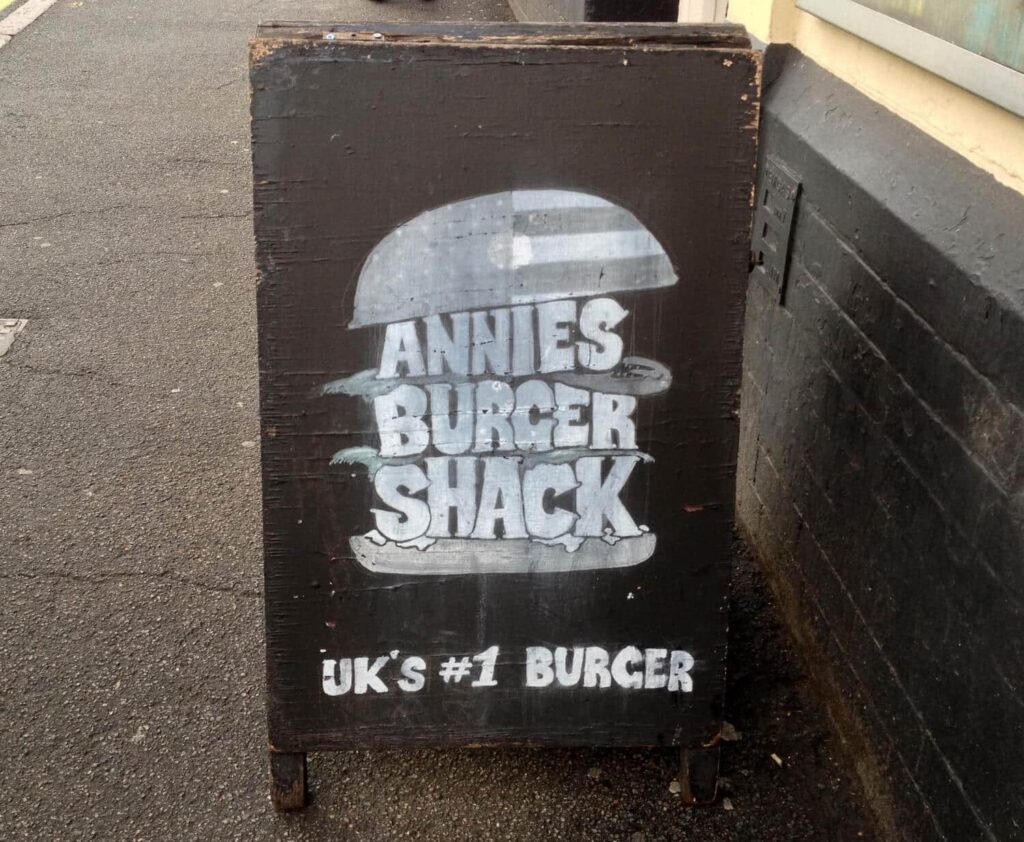 Situated inside The Navigation Pub in Nottingham city centre is the American burger restaurant Annie’s Burger Shack. It’s conjured up quite a name for itself over the last couple of years. Boasting a menu with a massive 25+ burger choice, all hand made to order from locally sourced ingredients. All except the occasional item that is sourced from it’s country of origin (i.e. Jerk seasoning from Jamaica.) It also hosts plenty of live music entertainment and carries a large selection of real ales behind the bar. It’s even won awards claiming they make the UK’s number 1 burger. But does it really live up to all the hype? 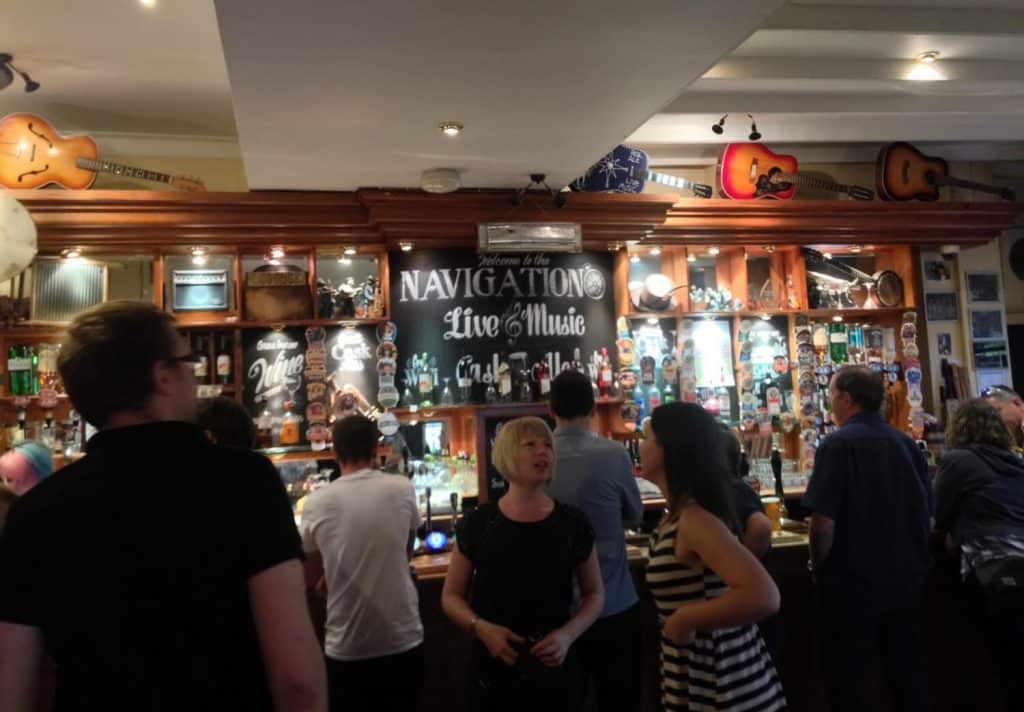 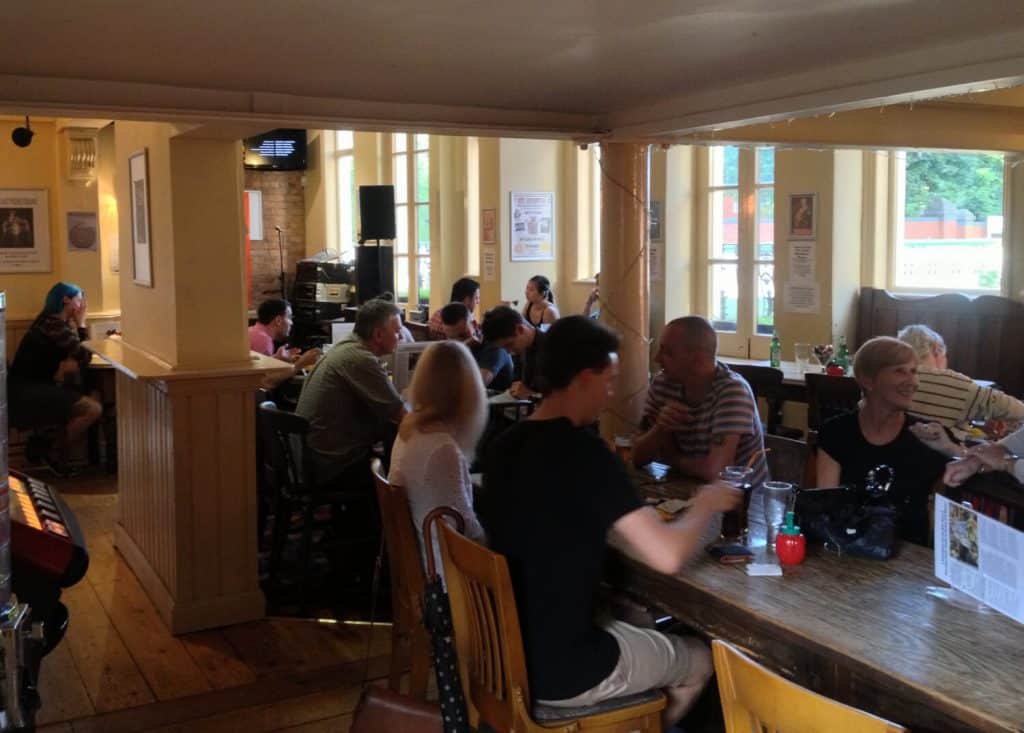 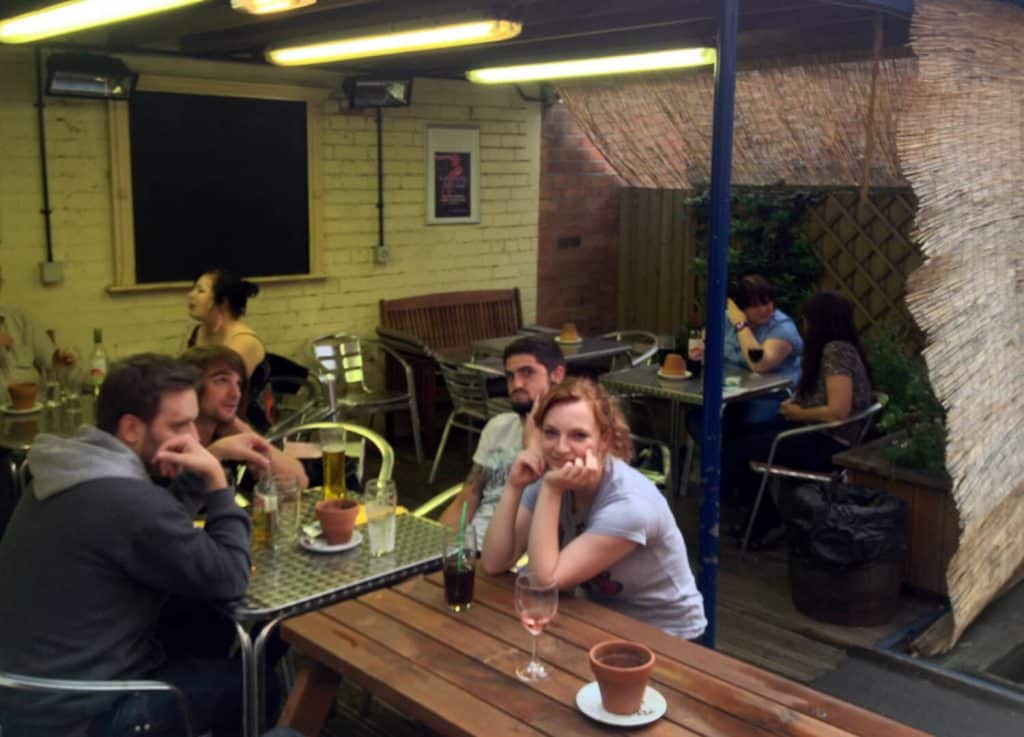 The venue itself is very pleasant with a cosy yet lively feel to it. There’s both indoor and outdoor seating with a nice little smoking area. The location is also ideal with the bus and train stations being only a 5 minute walk away.

My main concern about the venue is that I don’t feel it’s large enough to fulfill it’s popularity. We struggled to get a table and actually ended up eating in the smoking area. To be honest, that wasn’t a problem for us but I know it would be for others. What was frustrating was trying to book a table. When we phoned 3 weeks prior, they said they only took bookings for parties of 6 or more. Other than that it’s first come first serve. I personally felt disheartened by this. Not everyone likes to go out in large groups or may just want a nice meal with their partner. As a result, they will be subjected to waiting. I think this method of booking is a little unfair in the grand scheme of things.

However, once we had managed to commandeer a table, we began studying the menu in search of our burgers. This is harder than it seems as there are so many to choose from and they all sound amazing! There really is a burger for everyone. Even if you can’t find what you want, they’re more than happy to custom make you one to your tastes. Top marks for creativity and flair with the menu.

Referring back to my point about the venue size not being able to live up to it’s popularity, the unfortunate knock on effect of this is the wait times. We actually had to wait 2 whole hours for our burgers. Yep, 2 hours. Now I understand that it was a busy Saturday night and a wait was inevitable, but 2 hours is quite frankly taking the biscuit.

That being said, the eyes weren’t disappointed when they eventually made it to our table…

All burgers are served on a toasted bun with lettuce, tomato & mayo and each come with a side of curly fries, skinny fries or wedges. 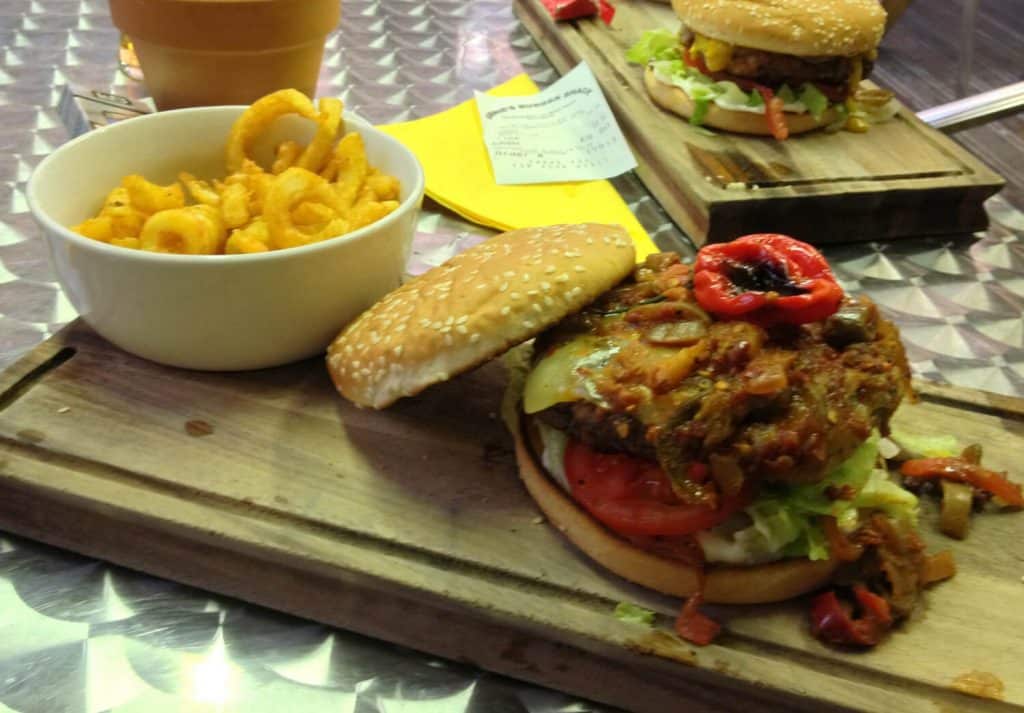 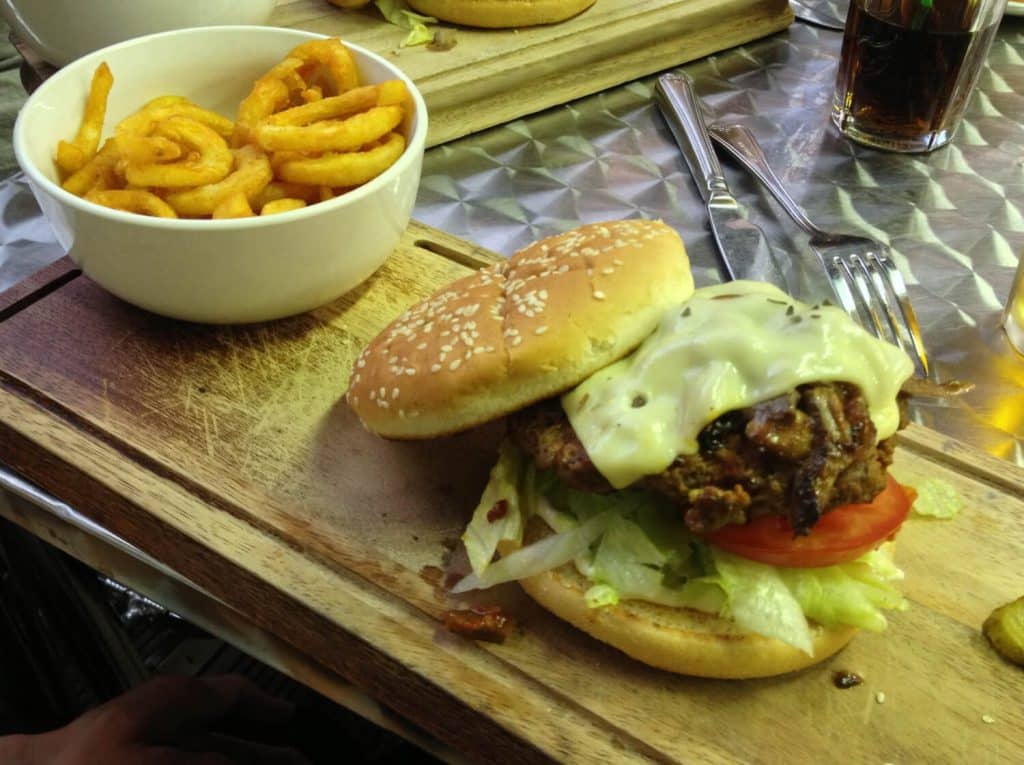 My brother Adam chose The ‘Thin Lizzy’ Burger. A 1/2 lb burger topped with homemade guiness soaked sauteed mushrooms and onions in a gravy and finished with melted swiss cheese. 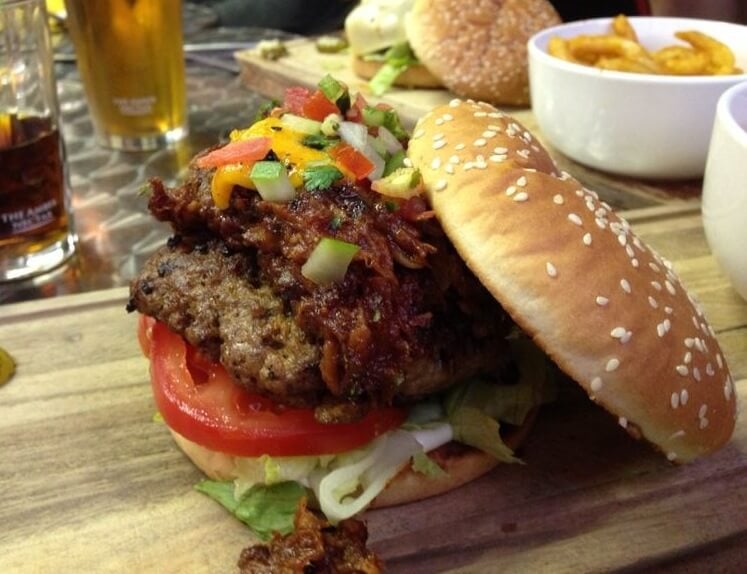 My future sister in law Phebe chose The ‘Jamie Blackmore’ Burger from the specials board. A 1/2 lb burger topped with their own home made slow cooked BBQ pulled pork, red Leicester and a garnish of salsa. 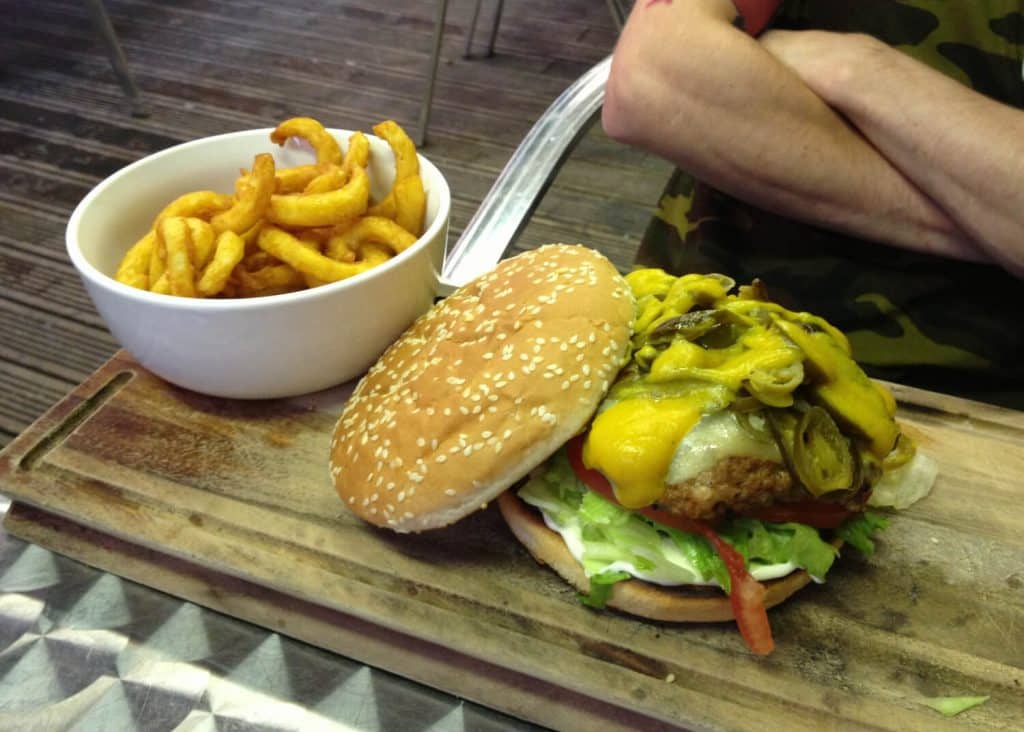 My brother Neil opted for The ‘Lemmy’ Burger. A 1/2 lb burger topped with melted cheddar, tons of grilled jalapeño peppers and their own Jack Daniels mustard sauce. 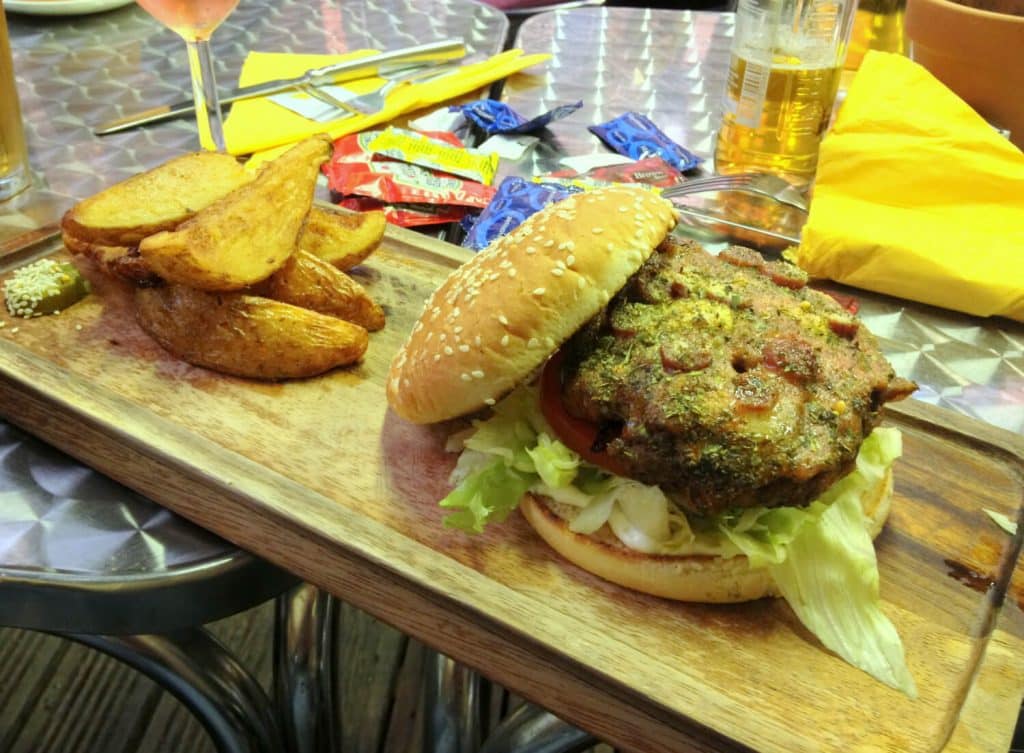 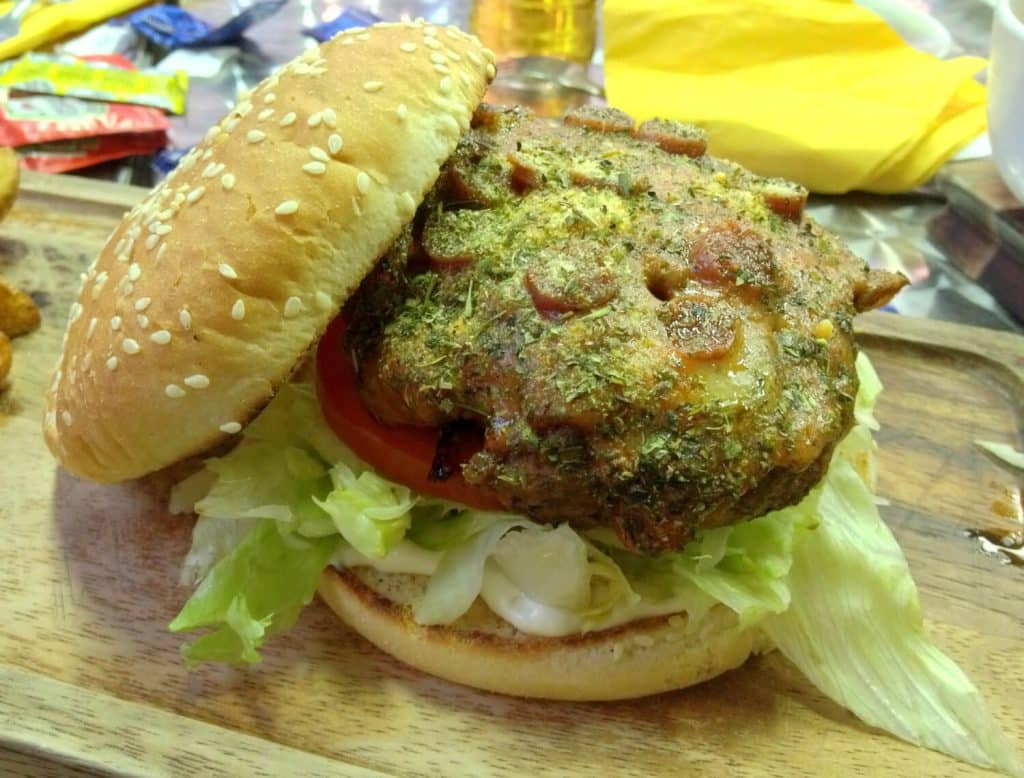 And I went with The ‘Peppino Pepperoni Pizza’ Burger. A 1/2 lb burger topped with marinara tomato sauce, melted mozzarella, little pepperonis and a pinch of parmesan cheese on top.

My burger didn’t last long at all, in fact, it was a complete contrast to my childhood in that I was actually the first to finish! It was a great flavour combination and not something I would ever think of doing myself at home. The blend of herbs and cheeses along with the mini pepperonis really did make it taste like a pizza on a burger. My only criticism was that my patty was a teeny bit drier than I was expecting but it was still probably one of the nicest burgers I have had at a restaurant.

The Mr was quite happy with his burger, if anything – for him, the scotch bonnet was a little too much. (And he really likes his hot food!) He opted to give it to my brother Neil who swallowed it whole. It’s worth mentioning that my bro is a bit of an animal when it comes to meats and hot foods so the bonnet posed no problem to him at all. He didn’t even break a sweat. That being said, the Mr feels that he has eaten burgers better than this one before but it was still tasty.

Its also worth noting that the sides were actually very tasty. The spices they put on the curly fries and wedges really do taste delicious. (I can’t comment on the skinny fries though as none of us had them.)

When it comes down to value for money, I think for what you get at Annie’s Burger Shack – it’s quite fairly priced. They range from around £8.50 – £12.90 and that includes your burger and choice of fries.

All in all I still feel I was slightly underwhelmed by my Annie’s Burger Shack experience but that was predominantly down to the search for a table & the waiting times. The actual food was tasty for the price you pay and the atmosphere of the pub itself was enjoyable. 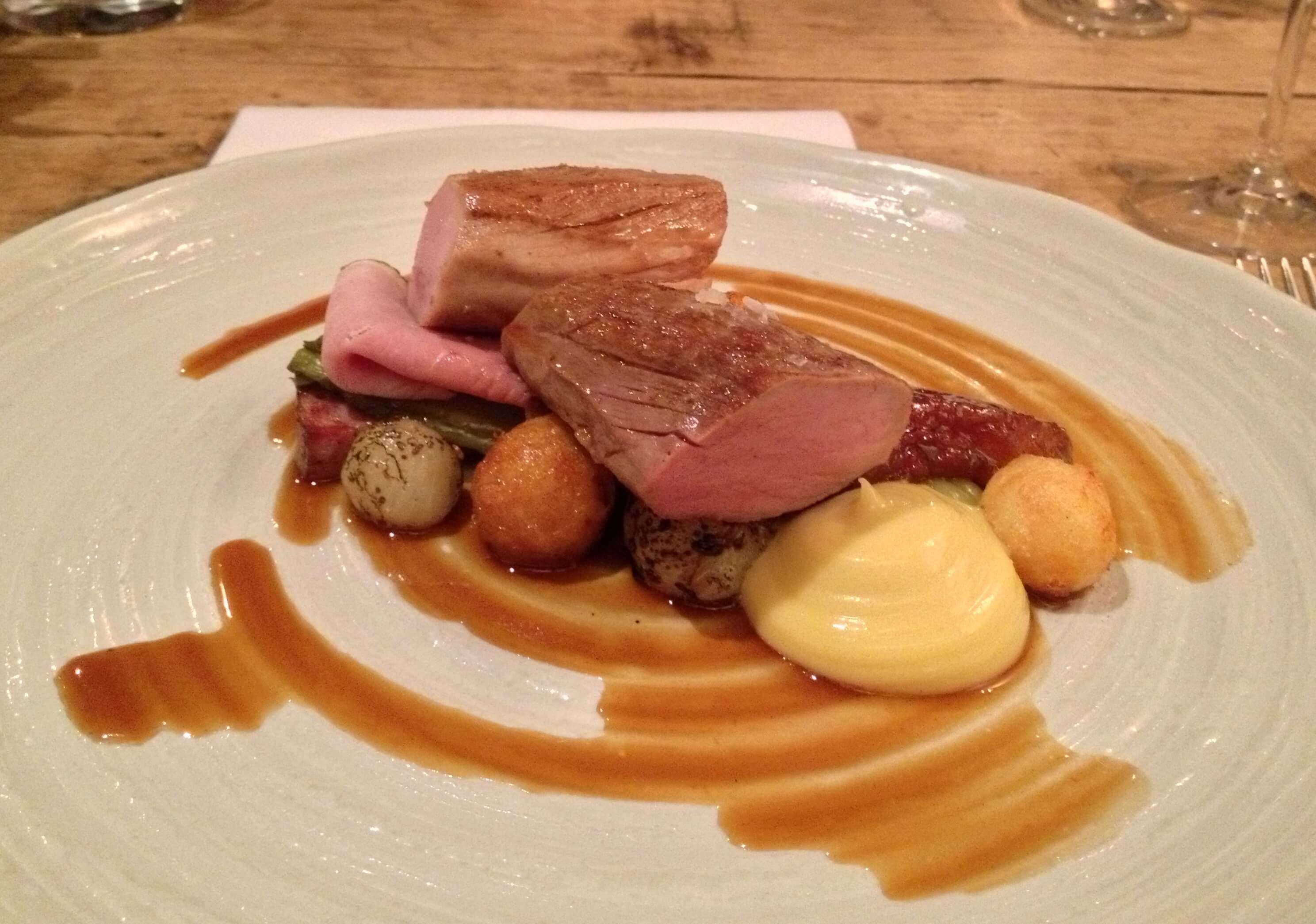 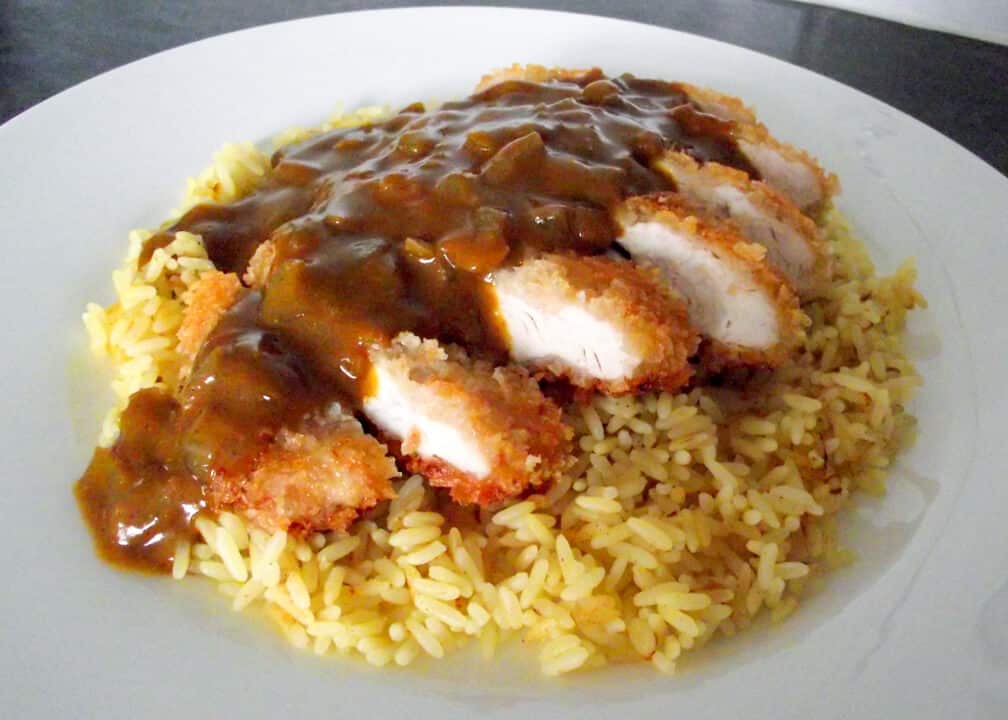 The restaurant has menú free gluten?

I'm not sure to be honest Johanna, check out the menu here http://goo.gl/ZrcQHc

Annies Burger Shack has moved into a larger establishment in a different part of Nottingham. The opening night was yesterday 9/01/14. It boasts a larger kitchen and a lot more seats. So hopefully some of the issues will be ironed out. As I love Annies, but waiting for 2 hours for a burger is OTT. Cant wait to try the new place

I had noticed they were moving this week. I really hope it helps improve the service, if it works, it will be a fantastic place to eat!

Without a doubt my favourite restaurant in Nottingham! You're right, the service is pants. But if you get a good table by the canal, in the sun, a long wait (with beer and company) isn't so bad. And, of course, the food is amazing. Worth pointing out, too, that every burger comes veggie, vegan and/or gluten-free!

You're right, I KNEW there was something I forgot about when I was writing the post! It is great that they offer veggie, vegan & gluten free alternatives to every item on the menu. That's a pretty rare quality in any restaurant. x